I love this shot of Mr. Frodo.  And just so you know. . . we don’t have snow here. This was from earlier in the year when we had the snow day.  Mr. Frodo played and ran in the snow all day. 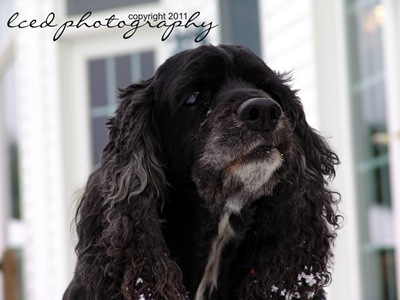 He looks pretty intense in this one, like he’s scanning the horizon for something.  LOL!

Mr. Frodo is the last one of our dogs.  Our Carin terrier Chip was attacked and killed by some neighborhood dogs a few years back.  Our buff cocker spaniel Pippen died of parvo even before that.  A few weeks ago, Reese’s was devastated when she came home and couldn’t find him anywhere.  She searched and searched in the dark all night long.

T. and she had flashlights and car headlights scanning the ditches and the yard for any sign of him.

Mr. Frodo has slept with Reese’s practically since we brought him home.  Going on 8 years old, that is a big chunk of her life.

When they couldn’t find him she cried herself to sleep.  When we came home her boyfriend, T. was sitting at the kitchen table, and just pointed to the couch.  He looked so sad for her.

We got up the next morning and I was going to call the vets and the shelters to make sure if someone brought him in they would know he was lost.

I called and the lady that answered the phone didn’t even let me finish my question.

“Is your dog black with a white chest?”

“I have two phone numbers for you to call someone found your dog.”

“black with white on his chest . . . that could be any dog and not just my dog.”

I called the numbers and when the man answered the phone and told me Mr. Frodo was in his kitchen eating treats with his dog . . .

It was such a relief.

We picked him up and just kept thanking our neighbor.  Reese’s got out of class and flew to the house to see him.

I was amazed when I found out where he was in comparison to our house.  He was over 2 miles from home, and across a major highway.

I was shocked because he’s never left home before.  And after 8 years, I never expected anything like this.

It is good to know there are still kind people in the world who will do the right thing.  Thanking God and our neighbor this Christmas season!