Have you seen the movie, Steel Magnolias?  I have seen it multiple times and at different stages of MY life I have seen different things in this movie and related to the different characters depending on which stage of my life I was in at the time.

I had written a post about Aunt Y, last Thursday, because that was the day she died.  But this weekend we were in Alabama for the funeral and Aunt Y's son had decided to have all women pall bearers.  He asked me if I would be a pall bearer.


I have to tell you I was really shocked.  I mean, first of all I had never heard of women pall bearers before in my life. I wasn't prepared for that and I just said, "Sure, no problem."


After I hung up the phone, Santa asked what he wanted and when I told him, I realized maybe I should have asked some questions. 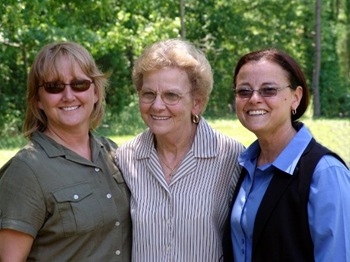 Santa's cousin with Aunt Y and one of my sister-in-laws in the pall bearer group.

Along with me, in the pall bearers group, were 2 sister-in-laws, my niece and Santa's cousin and her daughter.  (Her daughter was the little cousin Aunt Y, was holding in the picture from the previous post.)  We had the funeral today, and we had to wear boutineers and walk in after everyone else was seated.  When we first sat down in that first pew in the chapel, we all held hands and I felt very small.  Or really unworthy to be included in this group.  I mean I am only related to Aunt Y through marriage.  She was Santa's mother's sister.  Someone else probably said no and that's why they had to ask me, but still.  I felt honored to be included.


Once the first song was over, many of us had to stop holding hands to get out our tissues, that we all had tucked in our pockets before we walked in.  The two preachers were both from our families, so there were many times when they got choked up and had to pause before they could continue.


After the service, they played a country song, by Jamey Johnson, "Lead Me Home".  Well, I had been holding it together up until that point.  They had assigned "alternate" pall bearers (four men) to stand with us in case we couldn't do it.  Well, Santa's cousin J. was sitting behind me and when this song started he was singing.  He is a really good country singer (from Chicago, who knew right?) and when he was singing in my ear . . . well I lost it.  I was crying like a baby. I had been being selfish and hearing him sing about how there will be no more tears where she is I felt sad and guilty that I had only been thinking about myself.

I know in my heart that Aunt Y was not in that chapel with us.  The only thing we saw was a shell that she was using temporarily.  What we all missed was her spirit.  What we all cried over was that her spirit. . . . her caring, loving spirit was no longer with us.  So basically, we were all feeling a little sorry for ourselves.  Aunt Y is feeling no pain where she is and no disappointments.  There are no tears where she is.

After the service, we filed out last because we are the pall bearers.  We all lined up 3 by 3 across from each other so we could each pick up the casket to put it in the hearse.  While we were standing there waiting for them to bring her out, Santa's cousin looked across at me and says, "She would be so proud of us right now."


We all carried her at the cemetery from the hearse to the grave site.  She barely weighed anything by the time she died.  Even if she had, we were strong enough. The youngest one in the group, Santa's cousin's daughter said,

"She carried us, we can carry her."

Wow, the next generation of "Steel Magnolias".

I have never felt like a strong woman, like I was made of steel.  But all of us in that group will forever remember this day and all of us will remember we were strong.


Remembering now all the women at the funeral home.  Some with walkers and others with canes.  Some carrying babies and some chasing toddlers.  Remembering the women ironing the clothes for the service, or making sure all their kids had the "right" clothes.  Even while they themselves were hurting, making sure people were comfortable.  Making sure visitors had something to drink or eat.  Remembering all the women at their church who made food and served all of us.  Putting their lives on hold in order to serve us, and to honor Aunt Y.