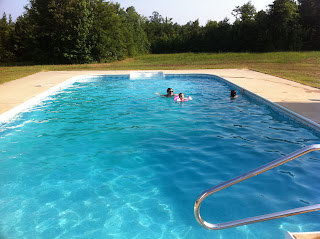 Well, this weekend was the official opening of our pool. Itty Bitty spent the night on Friday and I have pictures, I just didn't bring them to the office today.

I don't know what the rest of those words meant, but she was pretty upset and some of them might have been baby curse words, LOL!
I said, "Baby, Papaw isn't going to get it. You threw it in there." She said, "Uh uh . . . Papaw!" LOL! I said, "Papaw didn't throw it in there." She said, "Papaw . . .. . get it!"
It was pretty funny, but probably only to Santa and I!
She didn't get to swim until around 5:00 p.m. after she woke up from her nap. She got her little pink ring and her arm floaties and she was good. She could go just about where she wanted in the pool. Sometimes she would even lay her head back and get all her hair wet, which I thought was pretty brave!
Well, about 40 minutes later we had to go to the potty, and when we came back, she didn't have the ring or the arm floaties on and guess what?
Yup! She jumped right in the pool and sank to the bottom like a rock before I could grab her. I pulled her up and sat her in my lap. Then she looked at me like, "Gigi why did you do that!"
So she has officially given me the Gigi heart attack for the pool season.
She did pretty good, for not spending the night at Gigi's since August of last year. I think that was the last time she stayed with us. The only "fight" we had was brushing our teeth. She was NOT having it. She didn't even fight when we took a nap or went to bed. So it was really a lot of fun, and a lot less stressful knowing that we can "communicate" a little better now.
Sunday some friends came out and we cooked out and swam and goofed around all evening. It was a lot of fun. Their boys got a little bit sun burned, but then again they did stay in the pool for 5 hours! Pictures maybe later, tomorrow is orientation at college for Reese's so I'll be a little busy.