This is the story of Reese’s.  When I moved to beautiful Magnolia, Arkansas we brought Skittles with us.  He was born in Memphis.  I was perfectly happy just having one baby with Santa.  It was a son, I already had Lollipop and Tootsie Pop, so I was good.  However, Caree (as Skittles used to say), a girlfriend of mine that worked with us, had a different plan.  She “dared/challenged” me to see which one of us could get pregnant first.  Little did I know she had already been trying for 3 months or so. . . but anyway, after talking to Santa, I accepted the challenge. . . . got off birth control pills . . . . AND the next month I was pregnant.  Little did she know she was racing with a “baby factory”.  Hey that’s just the way Mrs. Claus rolls.

It would be another 6 weeks before Caree would get pregnant, so Reese’s is 6 weeks older than her son.

Reese’s was the easiest pregnancy and birth experience of all four children.  I could have stayed pregnant with her, because it wasn’t painful, or uncomfortable.  I didn’t get sick like I did with the others.  She was just easy.  She was two weeks late, and I was a little impatient.  When the doctor suggested I be induced on Tuesday the 17th, I decided to take matters into my own hands.  I did not want that again, I was induced with Skittles and it was a bad experience.  So Sunday, the 15th, I took a tablespoon of Castor oil.  I still make a face when I think about it.  I’m making that face right now as I type this story.  It was awful.

I remember taking a washcloth and rubbing my tongue to try to get the taste off.  Ewwww!  (*shutters*)

Monday morning the 16th, I was having harder than normal labor pains.  Normal being I had been having contractions for 2 weeks, with no results.  I was up at 4:30 a.m. sitting up on the couch and thinking, I’m gonna have a baby today.

But I got in the shower, and the contractions stopped.  So I went to work.  I was talking to a customer on the phone around 10:30 a.m. and I completely lost focus on what she was saying because I was having a pretty good contraction.  I asked her to repeat what she had just said, because of the contraction and she asked to speak to Santa.  Actually, she kind of demanded to speak to Santa.  She told him to get me to the hospital.  He laughed and said he would but I had been having false labor and we wanted to wait until the contractions were closer together.  But around 11:30 or so we decided to make the 45 minute trip to El Dorado where the hospital was and where Reese’s was scheduled to be delivered the next morning.

I fell asleep in the car on the way.  When we got there, Santa woke me up and I said, “Oh no.  I was asleep?  We’re gonna have to go back home.” I was so disappointed.

But since we had already gone to the hospital, Santa said, why don’t we just let them check you out and see.  So they admitted us, put us in a room and told us they’d check on us later because there were 8 other women in labor and delivery at that time. I had a few contractions while she was gone, but nothing major.

They came in to check to see how far I was dilated, and the nurse kind of freaked out.  I was already 9 cm. She ran to get a delivery room ready and I thought, “Woo hoo, I’m having a baby today!!”  I was last one to check in and the first to deliver. She was born a little after 3:00 p.m.  No stitches, no anesthesia, no complications, just easy as pie. 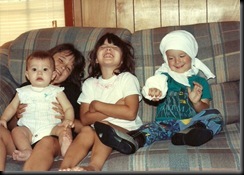 Yes, Reese’s is the baby in our family.  I remember exactly where I was when I decided she would be the last baby.  I was in El Dorado on N.West Ave. headed to a doctor’s appointment and Santa asked me why I thought I should get my tubes tied at the same time I was having the baby.  I told him I was done.  He said, “What if something happens and we want to have another baby?” I said, “Well, we’ll have to adopt or something because this baby factory is closing.”  Four is enough. 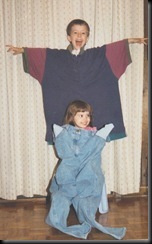 If you are Reese’s friend on FB you would see the comment on this picture is, “This is how our family got dressed . . . with their kids.”  Typical Reese’s humor. 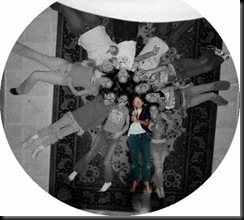 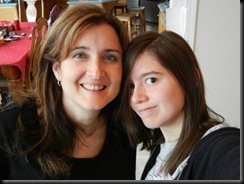 Reese’s and Mom Christmas morning with her new camera. 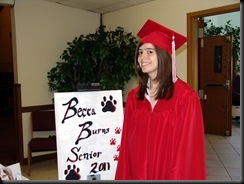