I know some of you might think I quit the blogging business.  Well, not yet, ha ha ha!  I have had a rough month.  It’s hard to put things into words but it’s been tougher than normal I guess.

So it’s March!  The sun is shining and burning off the fog .. . it’s cold, but I am so thankful that February is OVER!  I could dance on the roof!

My Dad
(If you are a new follower you can check out TGFIO to see what Thank God February Is Over, is all about..)

My mom recently reminded me that it was the 20th of February and not the 21st, that my dad died in a car accident back in 1991.  The reason I remember it as the 21st is because that is when I found out.  There was a commercial (I think because it was the Grammy’s or the Oscar’s or something) that said, “Today is February 21, 1991.” It was spelled out on the screen, and I remember thinking it was weird, I had never seen a commercial with the actual date on it before.  On the 20th, as far as I knew, my dad was still safe and sound in Madisonville, Kentucky, where my parents had moved after I was out of the house.

My dad could fix anything.  If a man made it, he could fix it.  Even though it might not “look” like new, it would work again.  I guess almost everyone on my mom’s side of the family has had at least one thing that was fixed by my dad.  Toasters, radios, blenders, televisions, stereos . . .  and the list goes on and on.  At least from what I remember.  I never heard him complain about fixing stuff, he just did.  He was the most patient man I have ever known.  Maybe he prayed for patience at some point, because of his little A.D.D. daughter.  It must have been a huge shock to both of my parents that they didn’t have a sweet little girl that sat inside playing with dolls and reading books all the time.  (It was crazy how much energy I had. At least that’s what they told me.)

I don’t remember this, but we lived on a U.S. highway until I was 3 or so, and when I was 2 I ran down the road.  I ran down a U.S. Highway!  YIKES!!  I did it so much that they remembered this about me like it was one of my physical characteristics or something.  “Oh yeah, she used to run down the road.  In the middle of the highway!”  Hilarious  . . . now.  I bet some of that patience was pushed to the test on those days.

Patient and maybe a nerd . . . logical for sure.  I remember when I wanted to marry my first husband having to ask him if we could get married early.  The plan was to get married in December before I was supposed to graduate the following May.  I had enough credits to graduate and to me and my future husband well, it just made sense.  Why wait another 6 months when we could be married in December and I could move to Texas sooner and the two of us could start our new life right?

I presented this idea to my mom who told me I would have to talk to my father about it.  I remember going in the back yard and my dad was in the shed working on a lawn mower or something.  (It wasn’t December yet, I think it was summer still.)  I pleaded my case to him, that I didn’t understand what the big deal was . . . I mean it’s just SIX MONTHS.

He was very calm, and he looked at me and said, “You’re right.”

He continued, “It’s just six months, that’s not very long.  I think you should wait.”

REJECTED and outwitted by logic!  THAT was how it was with my dad.  How could I argue when he said I was right?

I always imagine that Jesus has that kind of patience and logic that comes from how much He loves us.

So I guess you can tell I miss him.  But there is one thing I do wish.  I wish my dad would “pop in” where I work.  When I lived in Hopkinsville, I remember I was working in the deli at a local grocery store and I looked up and he was standing at the counter.  It was such a great surprise anytime he came to my work, or was sitting outside my apartment waiting for me to get home. People would always say, “Wow, that’s your dad?  You really look like him.” 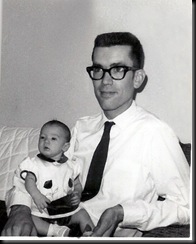 I love you Dad, and miss you!
Email ThisBlogThis!Share to TwitterShare to FacebookShare to Pinterest
Labels: dad, Hopkinsville, Jesus, Madisonville, TGFIO