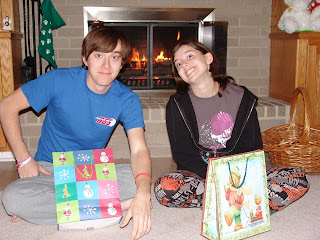 This Christmas was a little different because the little helpers are grown now. But they still opened Christmas pj's on Christmas Eve just like when they were little.

We opened gifts Christmas morning and I got Adobe Photoshop Elements (I have been using Corel all this time.) I got boots from Reese's and Coconut body spray, and a VS gift card from Santa and movies from Skittles. We got a new pool cover, so we didn't go crazy this Christmas. We got Santa some more lights for the Harley and some clothes. I finished the afghan I had been promising him since we got married . . . I finished Christmas Eve night. Whew! Reese's got a new camera and Skittles got a bunch of XBox games.

We got the gg-babies rocking horses, one pink and one black. 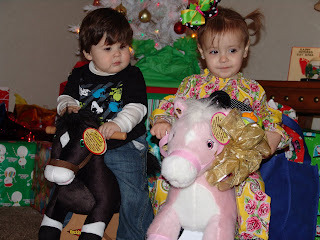 We went to Tommy's Christmas for lunch and had steak and the biggest potatoes I have ever seen. Cindi made chicken and dumplings that were delicious!! We watched them open presents and then we played "White Elephant" instead of Dirty Santa. 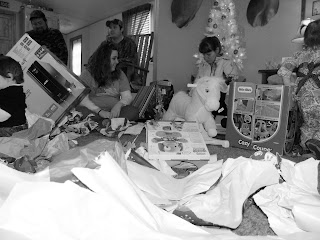 We took something from our house and wrapped it up so it didn't cost anybody anything, but it was still fun.  We drew numbers and played like Chinese Christmas where you can steal someone's gift if you don't want to open a gift. It was pretty funny. Skittles opened condoms. Reese's stole some bubble bath from Charms. Santa got some of Twix's used underwear and some toilet paper. GROSS! Well, we did say wrap up something you don't want. LOL!

Mrs. Claus got a 2010 Day Planner, a can of Bud Light, a can opener and two empty Bic lighters. LOL! It was a lot of fun. 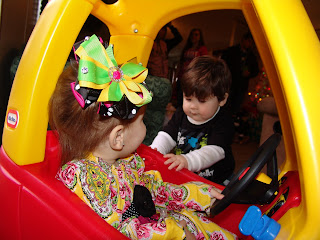 We watched Itty Bitty and Jar fight over the one Cozy Coupe that was put together, the other one was still in the box. 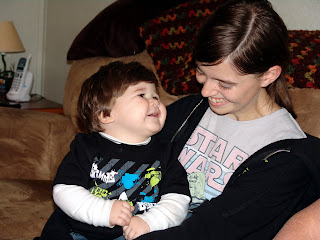 Yep, that's right Jar is Reese's new best friend. Look at him cheesin' away! Is that funny?

Email ThisBlogThis!Share to TwitterShare to FacebookShare to Pinterest
Labels: Christmas 2010