Trying out a new blog hop over at Menopausal New Mom (can you imagine?)
The week before July 4th, Santa and Skittles started work on a gazebo for by the pool.  Now a little history about our pool and gazebos.  It is very sunny by our pool and we have always had the problem of getting out of the sun.  We have purchased not one, but a total of FOUR portable gazebos and have watched storms and straight-line winds destroy every single one of them.  We actually have the twisted remains of the last gazebo in the field behind our shop. 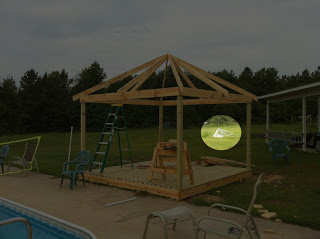 Okay, so as you can see from the picture above that progress continues on the gazebo. 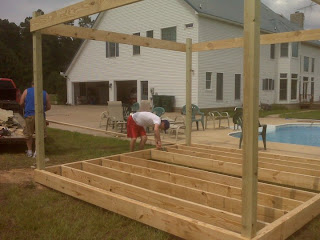 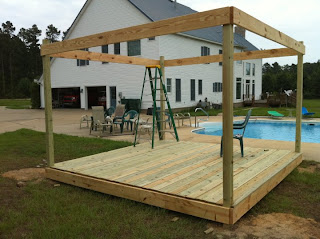 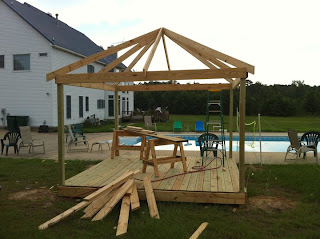 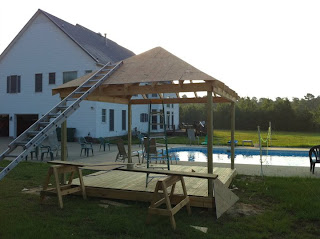 But all is quiet on the gazebo construction site now.  Last week Santa fell off this gazebo not once but TWICE!  The first time he landed in the pool, well half in and half out of the pool with his legs pinned under the ladder and against the concrete.  His left thigh looks like he was mauled by a bear.
The very next day while nailing the tar paper to the roof, he fell off the top onto the grass.  When he landed he kind of hit with his feet first and then sat down on his butt.   Then he got back up there and kept going.  But the next day, he could barely move.  He had to go to the doctor and he got a shot in each arm and a prescription for pain.  He's been at home on the couch every day (or at least for part of the day) since Monday.   I think gazebo must be some ancient foreign language for "Kill Santa".  It's really not funny, he's in a lot of pain.  The doctor said there was deep tissue damage to his back and that it would take 4-5 days to feel better.
So I'm asking for your prayers for Santa . . . we have a trip to Kentucky next week and it's going to be painful for him if he is not better by then.  So if you pray, please add Santa to the list and if you don't pray. . . . well . . . .
God misses you.