Day 5 was very eventful day, we got up and got out pretty early and drove down the coast past our condo and found some pretty amazing coastline.  So we stopped and took a bunch of pictures.


So okay, now all bets are off because these are just amazing pictures.  I don't know how many it will be but it won't be 161 which is how many I took on our 3 hour trek.  That's only because Santa said we can't stay here all day, but I could have. 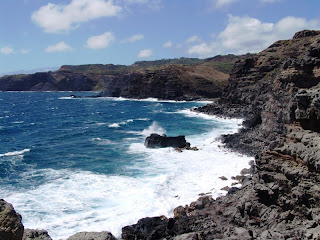 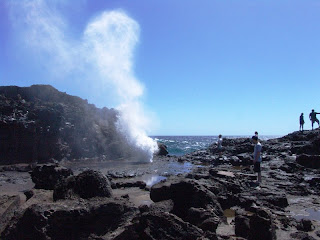 This is the blow hole we climbed down  the mountain to see.  You can see Skittles on the right.  Then on the far right Reese's and Santa on the cliff.  (No I did not go up there.) 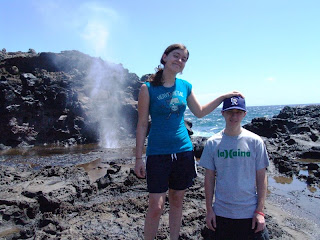 Reese's and Skittles by the blow hole. 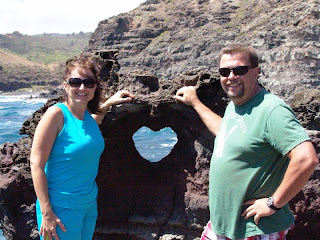 On the way back up the mountain, Reese's took mine and Santa's picture by this heart-shaped rock.  Cute huh? 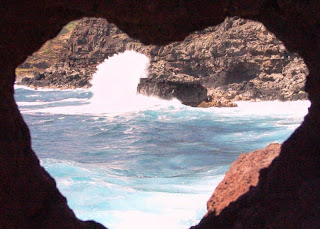 Another Reese's original idea, to snap the waves through the heart.  Pretty cool.
Then on the way up the mountain, Reese's and I took a little break, because we were out of breath.  She was complaining with her heart hurting, and being tired.  So we sat for a few minutes.  Then when I thought she had rested enough I told her to come on so we could catch up to the guys.  When she went to get up her face hit the rocks.  She passed out cold.  I didn't know what to do but try to pick her head up off the side of the mountain while I was screaming for her to get up and telling Santa that Reese's had passed out.  She has multiple scrapes and bruises under her chin and on her neck.  She had dirt in her mouth and hair. 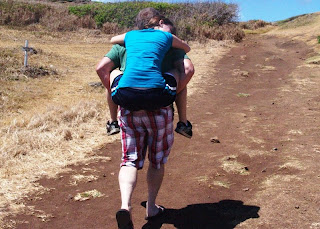 Then Santa who, if you are not familiar with our family. . . has had 2 heart attacks . . .YIKES!, packed Reese's up the mountain on his back.  This is the easy part of the climb when I could actually get my camera out to get a shot.  Isn't he the best dad in the whole wide world?
It was really scary.  I don't know if her blood sugar bottomed out or if she is just out of shape, but we have found more scrapes and scratches since we got back, some on her legs and some on her back.  Guess we're making an appointment when we get home to get some blood work done.
Wow!  What a vacation so far. . . .

Email ThisBlogThis!Share to TwitterShare to FacebookShare to Pinterest
Labels: 2010 Vacation