Ten on the Tenth - Tommy

Today, Santa's second oldest son, Twix, is 40 years old!  Since today is his birthday I'm dedicating this post to him.  Okay, Twix's real name is Tommy, so just for today we are going to use his real name.
1. TOMMY HUNTS 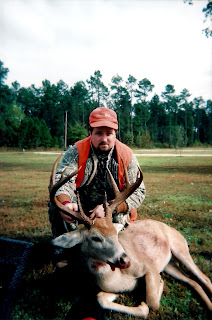 This is Tommy with one of the biggest bucks he has ever killed.  He brought it out to our house to skin it, and we took some pictures.  This is only one of hundreds of deer Tommy has killed during his lifetime of hunting.
2.  TOMMY FISHES 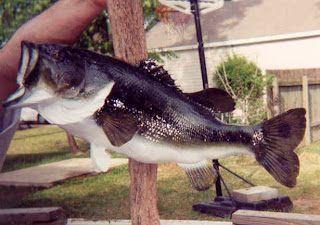 Tommy loves to fish, this is one of the fish mounts he has done at his taxidermy shop.  Oh yeah, that's another things about Tommy.
3.  TOMMY'S TAXIDERMY 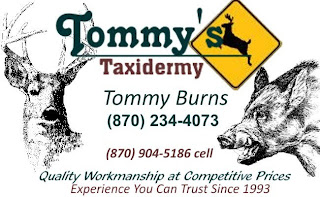 Tommy owns his own taxidermy shop.  Since he retired from the steel mill, he has been able to do taxidermy full time.  We have several heads in our house that he has done for his dad.  He really does an excellent job.  If you need some taxidermy work and you live in our area, you should call him. (Just a little plug for our son's business.)
4.  TOMMY GARDENS
Tommy loves to raise a garden, he starts almost after Christmas talking about what he's going to plant and where.  If you don't have a garden, he'll figure out a way to help you put one in.  If you have one, he'll help you plant, sometimes more than you want, but he'll help you.  Especially now that he has his own tractor.
5.  TOMMY'S FUNNY 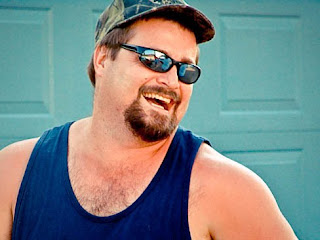 July 4th each year we have a kind of a family reunion, where we cookout, swim, shoot off fireworks and the whole nine yards!  Anyone and everyone from our family has a standing invitation every year.  What everyone always tells me every year is they look forward to hearing Tommy's stories most of all.  He is a total nut, and when he gets started telling stories, the way he tells them, well you'll just have to come over some time.
6.  HOW WE MET
Well, I actually met Tommy's youngest daughter first.  Then her sister and then I met Tommy and his wife.  The way we met, was a little different.  Since he was Santa's second oldest adopted son from his first marriage, I knew about him before I met him.  We moved back to Southwest, Arkansas from Memphis after Skittles was born.  When we moved here we didn't know where any of Santa's kids lived- if they still lived here or if they moved away.
Santa went hunting and I stayed at home (the hunter's widow) with the little kids.  He called me after lunch one day and said that he had something to tell me.  He had met someone and he was in love with her.  "Wha???  Now you have my attention!", I thought.  "Do what?", I said.  He said, "I'm telling you, I am in love with her."  My mind was reeling trying to think who would be at the deer camp that my husband could have fallen in love with, but then he let me off the hook.  He said, "She is 6 years old and she is THE most beautiful little girl I think I have ever seen in my life."  I was like okay? what's the deal?
He had been at a deer camp, hunting and a little girl came up to him and gave him a business card for her dad's taxidermy shop.  When Santa read the card, he knew right away it was his son.  He looked for the person this little girl was with, but it wasn't Tommy, it was another lady.  He told the lady that Tommy was his son, and that meant this little girl, Bit O Honey, was his grand-daughter.
We found out where they lived and we went to their house and found out she had an older sister, Starburst.  Well, when I met Tommy for the first time, he sat both of us down on the couch in his living room, and I will never forget what happened.  He basically "dared" us to be in his daughters' life.  He told us how his own mother had made promise after promise to his two girls and never followed through with any of them.  Promising to come and see them, or to take them for a weekend, or just to send them a birthday present.  He told us he appreciated that we wanted to come over and meet them and everything, but he didn't want his girls to go through that ordeal again.  Having no grandparents would be better than having that happen to them again.  So right then, I made up my mind that if I told them I was going to do something. . . . well, I just was going to do it.  No excuses. 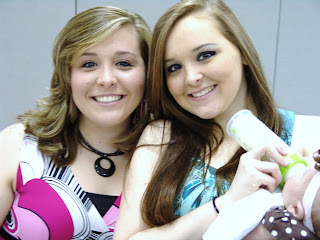 I mean look at them, they are both so beautiful and so full of life, who wouldn't want to be around them and be a part of their life?
7.  TOMMY WAS MAMAW'S FAVORITE 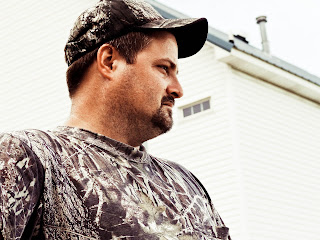 It's true!  Santa's mom would tell us every time we went to visit her, how Tommy was her favorite of all of Santa's adopted kids.  She would tell us that we shouldn't tell anyone else, but she always liked him the best.
8.  TOMMY IS POPPA-T 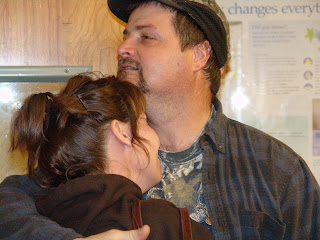 Tommy and Cindi's reaction when we found out Itty Bitty was okay and so was her Momma.

In 2009, Tommy became a grandfather, in February when Itty Bitty was born and then again in December when Jar was born.
9.  TOMMY LOVES 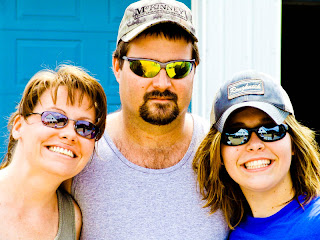 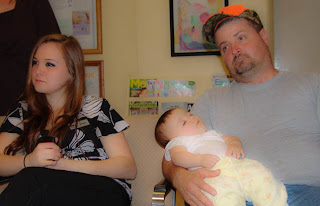 Tommy loves his family, and has made a lot of sacrifices for them.  He tries to act like a tough guy all the time, but I see how much he does for them.  For the first several years he and his wife were married her epilepsy was so active that she was not able to drive.  So he had to work shift work AND do all the errands at home too, because she wasn't able to drive anywhere.  Now, praise the Lord, her epilepsy is better controlled, so she can drive again, but when the girls were little, he had to sacrifice a lot for them.  They are truly blessed to have him as the leader of their family.
10.  TOMMY CALLS ME MOM
Every year at deer season Tommy has a cookout before opening morning at his house.  He usually cooks a pig, and everybody brings something.  Well, before this, he had always introduced me as his dad's wife.  But this time, when some of the hunters came to his house, he introduced me as his mom.  It really made me feel great inside, I had graduated from just being Dad's wife, to being his mom.  How cool is that?